Enter your name and email below to join the waitlist and we'll notify you when the course is open for enrollment.

If You Don't Know The Origin & Insertion Of The Muscles,

How Will You Get Control Over Your Sculpting?

ANATOMY OF THE HEAD & NECK

Walk Away Knowing EXACTLY What You
Need To Do To Improve Your Sculpting...
OR YOUR MONEY BACK!

The REAL REASON You Can't Grow As An Artist UNTIL You Nail Your Anatomy!

I'm probably the slowest learner you've ever met. It takes me forever to absorb things... and I have to tinker for long bout's of time and fail over and over.

Sometimes, it seems like I try to do things the hardest way possible... on purpose! The excuse I tell myself is that if I can do it the hardest way, then I really got skills.

So I've tried every way possible to sculpt and paint over the years.

But there’s one thing that’s made the biggest difference and it’s not just learning some anatomy. Specifically, it was making my first Écorché.

Écorché, if you don't know, is French for the human body with all its skin removed… hmm…

All the greats have done it... Leonardo da Vinci's can be seen below. 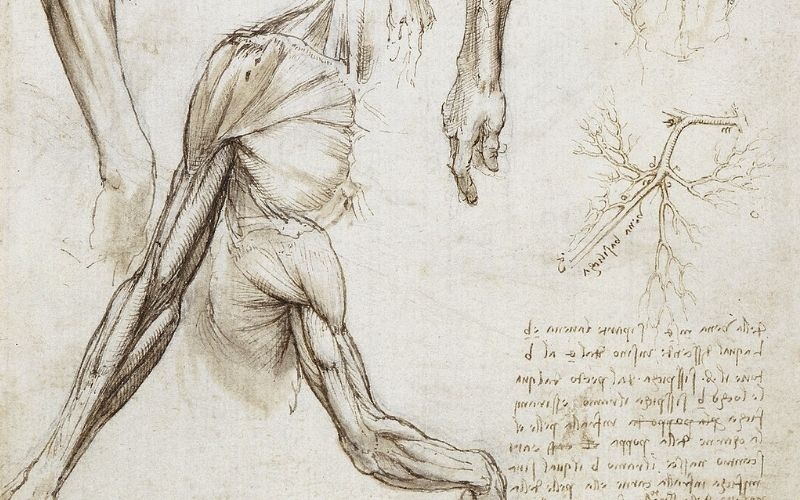 But I like to look at things from a brain-based approach not just a tradition or history approach.

To understand why its important, we need to remember one thing: studies have shown that the brain can only hold around seven bits of information at a time... like a phone number.

Unless your European... if your European then your brains are bigger because of your longer phone numbers... :)

But seriously, have you ever looked at your sculpt or your art and just had no idea where to start or even what to work on?

Well, a big part of that is because when you look at the human body you are looking at, literally, hundreds if not thousands of different bits of data...

Your brain can’t even handle all of that information at once. It has no way to get into all that information sitting in front of it. So, you and I just sit there and stare blankly wondering... what's wrong and blaming myself.

Most likely, you then hit the books... grab your favorite anatomy book... only to be confronted with a 100 different bits of information all on a single page which leads to you just sitting there and staring blankly at the book just like you did your work. :)

That's happened to me. Lots of times.

The Cold Hard Truth Is:

If you don't deep dive into your anatomy you're work will suffer and it will take you longer to reach the results others achieve.

So how did I get my brain into action?

The answer is one thing: I made an Écorché.

It actually happened when I worked at Pixologic. I made a video in 2007 called "How to sculpt the face using an ecorche approach".

The sculpt I made was better and created faster than any other sculpt of the face before but I was just dabbling with a cool ZBrush feature. It didn't occur to me till a year later that I had actually stumbled upon the one thing that would change my Art.

The key to the Écorché approach is that it allows our brains to focus on very simple bits of information.

We do that for every muscle on our list and next thing you know we have a sculpt that’s more accurate and a process that’s more controllable than before.

Écorché breaks the human body down into digestible chunks and it gives us the control we need.

ANATOMY OF THE HEAD & NECK

A Proven Method For Leveling Up Your Anatomy, Your Sculpting & Your Art!

of Your Money Back!

But, I can already hear people saying that this takes too long. It’s too complicated. There’s so many muscles in the human body...

Now, I’ve trained surgeons before and yes there are lots of muscles in the human body but THIS isn’t about memorizing muscles. No, sirree.

In fact, I was in a workshop with the amazing sculptor over a decade ago and he was was doing a live demo when this dirty little secret came out.

... As he’s doing this demo he couldn’t remember the name of one of the muscles in the leg!

Of course I write this tongue-in-cheek. Richard is an amazing sculptor and his skill does not exist because he's an anatomical encyclopedia.

Studying Écorché is not about memorizing the muscles it’s about discovering them... for yourself!

We have a saying at Vertex. You’ve probably heard it before. It’s not new:

You can’t draw what you don’t know.

Ever drew or sculpted something that you were convinced was perfect… and then woke up the next morning and seen how wrong you were?

Let’s get back to the brain-based approach. Your brain is what we call an unreliable narrator.

It is not omniscient. It does not know everything and there are things that it gets wrong.

When the truth is we’re stuck in the Dunning-Kruger effect. Yeah, soak that one up…

The truth is that sitting down and putting in the work to make your own Ecorche is how you get things done faster.

It’s the equivalent of the Navy SEALs saying, go slow to go fast.

So, if this is something you are lacking clarity, confidence or certainty in then get registered by clicking the link below and I'll see ya soon!